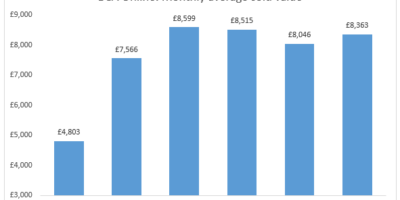 Classic Car Auctions (CCA) achieved an impressive 80 per cent sales rate when it offered 160 cars to a packed sale room at the Warwickshire Exhibition Centre near Leamington Spa on 10th June with a total sales value of £1.8 million.

Bidding was lively throughout the day with Porsche, BMW and Mercedes marques proving exceptionally popular. However, it was a replica Lamborghini Countach that stole the show when an intense two-way bidding war broke out over the Dave Shorts example taking the final price, including premium, to £50,050, over £30,000 more than its original lower estimate.

Established classic marques continued to attract the most serious attention with Mercedes-Benz cars achieving a 94% sales rate, led by the aforementioned 280SL Pagoda and the ever popular 190E Cosworth, an example of which went for £15,950, almost £6,000 over its lower estimate.

Following a recent trend several of the Jaguar XJS models on offer caused excitement with a 1990 V12 convertible sliding easily past its lower estimate by £2,700 to £11,220 including premium and a 1989 model achieved £20,350.

Minis and MGs also did well on the day. A 1966 Downton-tuned Austin Cooper enjoyed close inspection pre-sale from crowds of enthusiasts and was successfully hammered away for £36,300, while an impressive 1968 MGC GT rocketed past its lower estimate by almost £9,000 to fetch £23,650 on the day.

“I can’t tell you how happy we are with the results of our June Sale,” said Classic Car Auctions’ sales manager Gary Dunne. “We managed to pack out the sale room to the point it was standing room only and with around 80 per cent of lots selling it was a great result for our vendors. I want to thank all of our vendors and buyers for their support, and look forward to seeing them all at our next sale in September.”