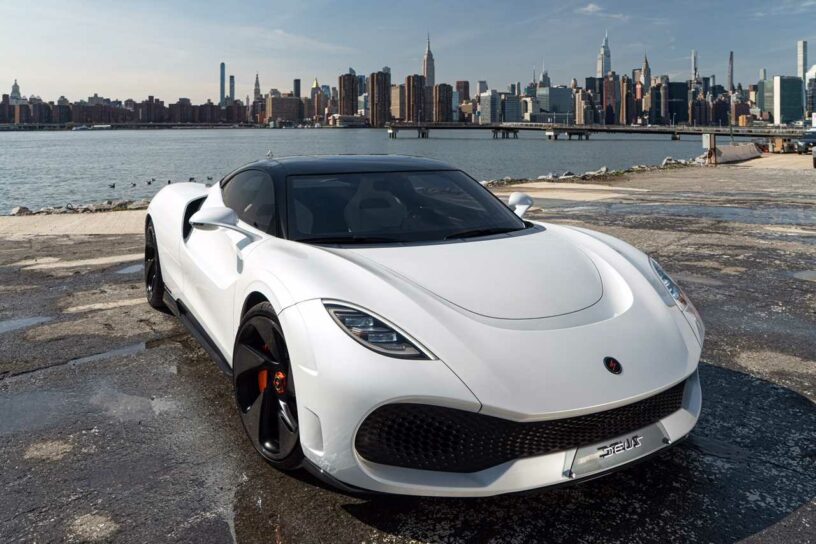 The all-new production-oriented electric hypercar, being developed with technical support from Italdesign and Williams Advanced Engineering, is set for its inaugural showing at the famed Concorso d’Eleganza Villa d’Este. With the stunning Lake Como in Cernobbio, Italy, as the background, the DEUS Vayanne will carve its place in history at this annual exhibition of prestigious historic vehicles, scheduled for May 20-22, 2022.

Following Concorso d’Eleganza Villa d’Este, the Vayanne – showcasing its timeless design language that does not fit among current electric vehicle design trends – then heads to Monaco for its European debut where it will be among the select supercars unveiled by H.S.H Prince Albert II of Monaco at the official inauguration of Top Marques Monaco, scheduled to be held June 8-12, 2022, at the Grimaldi Forum.

“Our world debut in New York sparked worldwide excitement about the Vayanne and what we’ll accomplish with Italdesign and Williams Advanced Engineering,” said DEUS Founder and Head of Design Adrian-Filip Butuca. “Now it’s time to give our many European fans chances to see the Vayanne in real life at Concorso d’Eleganza Villa d’Este and Top Marques Monaco, both highly prestigious, influential, and respected exhibitions.”

Butuca designed the Vayanne to provide hypercar performance while offering qualities not often associated with high-performance vehicles: a high level of luxury and comfort, usable storage space, and most importantly a daily usability, making it unique in the competitive hypercar class.

DEUS will produce only 99 examples, and no two will be exactly alike as each owner will customize their Vayanne to their individual tastes. First deliveries are expected in 2025, and each Vayanne will be built at Italdesign’s facilities in Turin, Italy, with Williams Advanced Engineering on board to lead the application of its innovative electrification technologies. Together Italdesign and Williams Advanced Engineering will leverage their deep expertise with prototyping, styling and aerodynamics, series production, electrification, light-weighting, innovative chassis structures, and vehicle and systems integration.

After its European debut at Top Marques Monaco the Vayanne heads to The Battery Show Europe, considered the European automotive industry’s showcase for advanced battery and EV technologies. Scheduled for June 28-30 at Messe Stuttgart in Stuttgart, Germany, the Vayanne will undoubtedly be one of the stars of the show and will be on display in the Williams Advanced Engineering exhibit located in Messe Stuttgart Hall 8, Stand No. D30.

An Encore Appearance in America
Just months after DEUS Automobiles’ and the Vayanne’s New York world debut, the Vienna, Austria-based automotive brand will return to America. The Vayanne will grace the Concept Car Lawn on the other side of The Lodge at Pebble Beach on Sunday, August 21, 2022, at the 71st Pebble Beach Concours d’Elegance.

This showing provides U.S. automotive enthusiasts, collectors, and media a second opportunity to see the Vayanne in person and among the splendor of America’s most significant concours exhibition showcasing many of the world’s most historically significant and extremely rare vehicles. DEUS Automobiles leadership also plans to host a private viewing event for potential customers prior to the Vayanne’s showing on the Concept Car Lawn. Consumers can inquire directly at inquiries@deusautomobiles.com.