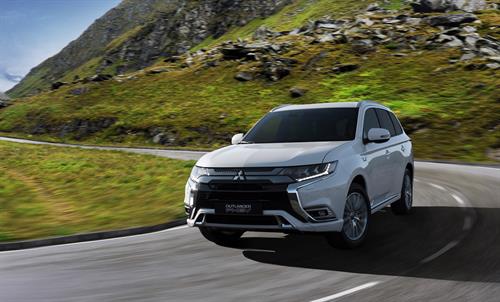 Mitsubishi Motors Corporation (MMC) will celebrate two debuts at the 88thÂ Geneva International Motor Show*1, to be held in Geneva from March 6 through March 18, 2018: the European premiere of theÂ MITSUBISHI e-EVOLUTION CONCEPT,Â and the global premiere of the new 2019 model yearÂ Mitsubishi Outlander PHEV,Â which will be introduced to the European market towards the end of the year.

Both the newÂ Outlander PHEV,Â and theÂ e-EVOLUTION CONCEPTÂ embody the cutting edge technology and expressive design MMC is making its own, today and for years to come. They also express, each in their own way, MMCâ€™s product strategy as part of the brandâ€™s ambitions: a carefully crafted blend of SUV expertise and electro-mobility technology, augmented with state-of-the-art system integration technologies for a progressive driving experience.

*1â€¦Le 88e Salon international de l’Automobile GenÃ¨ve, with press days on March 6 and 7 and public days from March 8 through March 18. MMC will hold its press conference at 10:45 am on March 6 at the MMC stand in Hall 2.

In 2013, and drawing on a background of 80 years of 4WD expertise, 50 years of electro-mobility R&D, and 30 years of rally winning all-wheel control technology, MMC launched the segment-definingÂ Outlander PHEVÂ plug-in hybrid electric Twin Motor SUV. MMC did so ahead of other car manufacturers.

Bringing together the very best of MMC technology, theÂ Outlander PHEVÂ is MMCâ€™s flagship model. Its PHEV technology delivered important breakthroughs in cruising range, still a bottleneck in the EV category. TheÂ Outlander PHEVÂ is the answer to customers who want to extend the range of their EV car journeys, and who want to go on other adventures rather than hunt for chargers.

The 2019 model yearÂ Outlander PHEVÂ features a next generation system with both EV and SUV breakthroughs. More SUV and more EV than ever, the newest iteration unveiled in Geneva will push boundaries even further with â€“ amongst others â€“ a complete redesign of its powertrain, with sharper dynamics, a more refined interior, and a subtle design evolution.

The generator output is increased by 10%.

The rear motor output is increased by 10%.

The drive battery capacity is increased by 15%.

The drive battery output is increased by 10%.

THE DESIGN: SHARP AND SOPHISTICATED

The outside appearance of the vehicle has been enhanced with a number of subtle improvements, such as new LED tech-look headlamps, rectangular front fog lamp bezels, a more substantial front grille with the DYNAMIC SHIELD visual identity, and a front centre cover skid plate. A more elaborate multi-spoke two-tone design for the new 18 inch alloy wheels, and the addition of a larger rear spoiler give the car a sharper and more sophisticated look.

*Full data to be released at launch time

TheÂ MITSUBISHI e-EVOLUTION CONCEPTÂ is a technical prototype to illustrate the strategic directions of a renewed Mitsubishi Motors brand. It incorporates the strengths of SUV, EV, and the tight integration of new systems for a connected mobility customer experience.

The all-electric high-performance SUV embodies MMCâ€™s new brand strategy under the new â€œDrive your Ambitionâ€ global tagline, a strategy that reflects an adventurous and progressive mindset for inspirational design and product, based on breakthrough suvs, and driven by a fusion of electrification and system integration.

Based on a â€œRobust & Ingeniousâ€ philosophy, MMC has created a distinctive and engaging design that gives shape to the robustness, authenticity and functional traits distinguishing MMC vehicles.

MMC has a long and strong heritage. Think of “Mitsubishi Motors,” and proven off-road performance, along with superior 4WD control, come to mind. Now, the banner of superior, high-performance 4WD control is carried forward by theÂ MITSUBISHI e-EVOLUTION CONCEPT. Its design expresses the readiness to grip the ground with all four-wheels, and the agility of a high performance cross-country tourer.

The front face design of theÂ MITSUBISHI e-EVOLUTION CONCEPTÂ is a fresh take on MMCâ€™s archetypal DYNAMIC SHIELD design. The black grille is shielded under glass, a subtle hint that this car is a high performance electric vehicle. Protected under the glass, and accentuated by blue lines for emphasis, sit cameras and sensors. Aerodynamics were improved by large air intakes beneath the headlamps. They also help to efficiently cool the electric brake calipers.

In the side view, the design emphasises the SUV personality using a profile with strong shoulders, and a lower body with a distinctive inward slope, along with a sharp, sculpted horizontal character line, and a high ground clearance.

The short overhangs project nimbleness and agility. The muscular styling of the corners hints at the powerful torque the four wheels are ready to lay down on the tarmac.

The deep slant of the front windshield, and the short overhangs create the unique silhouette only possible in an EV.

The large hexagon shape at the rear draws inspiration from the spare tyre cover of the quintessential SUV, the legendaryÂ Pajero, a hallmark of off-road driving, and one of the most iconic chapters of Mitsubishi’s heritage.

The design of the C-pillar reminds of the tail fin of a jet. The air intake and diffuser running from the C-pillar to the rear bumper add to the aerodynamics.