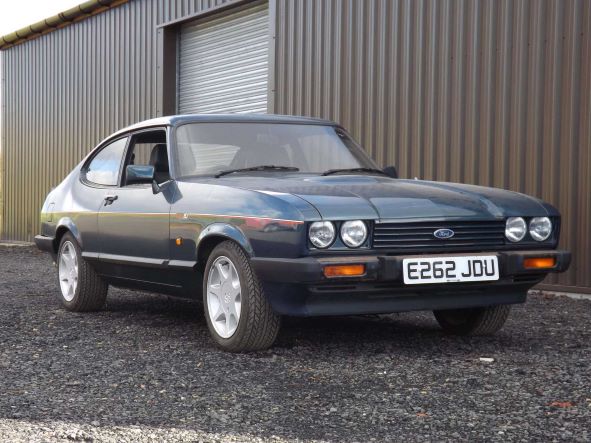 A super garage find Brooklands with just 2,960 miles from new, sold for £39,938 at the CCA sale on Saturday, December 10th, driving home the message that there’s gold in many an old garage.

Supplied and registered new by Soans of Leamington Spa the Brooklands Capri was finished, as they all were, in Brooklands Green with a Raven leather interior.

From long-term storage in a collection of Ford Capris and purchased by the vendor last year, it will require some recommissioning by its new owner. The interior was in time warp condition as one might expect given the mileage of less than 3,000. With a bit of time, care and a bit of ‘elbow grease’ it will return to top form.

As usual this rest of this pre-Christmas sale did not disappoint with hundreds attending the live auction in person, as well as others bidding online and by phone. There really was something for everyone.

Classically presented in Old English White with a black leather interior and chrome wire wheels with just 37,080 miles indicated, it was supported by the service records.

Very smart, LHD rally-prepared and imported from California it was UK-registered in 2011 and professionally converted to International Rally specification by Rally Preparation Services of Witney at a cost of £60,000. Originally prepared for the 2012 London to Cape Town Rally and built for strength and durability. After the 2012 London to Cape Town event it was dry stored and only used occasionally.

Purchased by the vendor three years ago with plans to go rallying however the arrival of COVID changed his plans (and everybody else’s).

CCA are now inviting entries for their 2023 sales, the first of which will be at the Practical Classics Classic and Restoration Show at the NEC, Birmingham on the 24th to 26th March 2023. All details along with how to get a free valuation for your car, can be found on the website www.classiccarauctions.co.uk