Hagerty identifies 9 estates worth more than the saloon 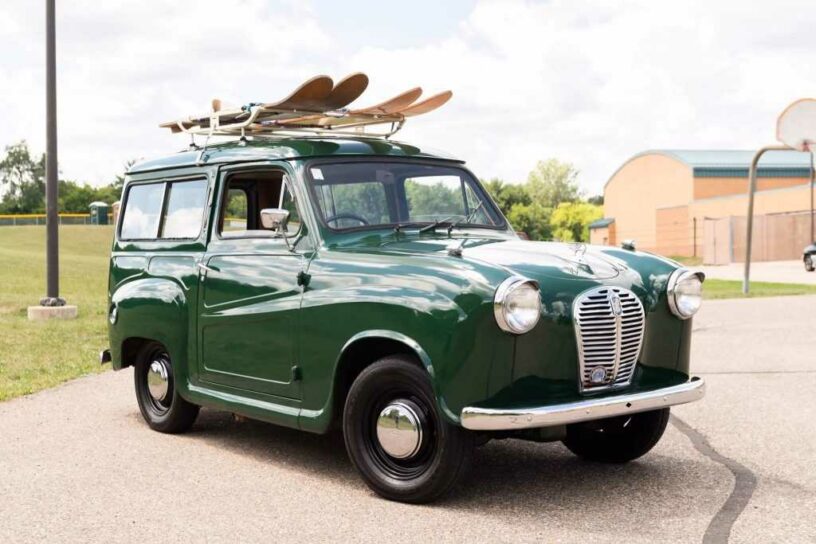 Whether it was billed as a Traveller, a Giardiniera or a station wagon, estate cars have always been popular, and since the first shooting brakes were built to ferry the guns and game for Edwardian country gentlemen, estate cars have been an ever-present sight on Britain’s roads.

Hagerty’s global car market data analysts noted the rise in classic estate car values, compared to their standard saloon counterparts, and went in search of 9 examples that are worthy of attention, ranging from the exotic to cars that were once relatively mundane, daily transport.

Audi 72 Station Wagon ‘Variant’ (1965–1969)
Average Hagerty Price Guide value: £7200
Difference vs 4-door saloon: +2.5%
Aimed directly at the quality middle market that the company has come to dominate, a three-door Station Wagon alternative was offered to the standard saloon. Today, values of the rare estate are slightly higher to the saloon throughout the condition range listed in the Hagerty Price Guide.

Austin A35 Countryman (1956–1962)
Average Hagerty Price Guide value: £8600
Difference vs 2-door saloon: +3%
The Austin A35 Countryman wasn’t the most elegant of estate conversions, being little more than an A35 van with side glass and slightly better trim, but the extended versions actually sold better than the saloon. Today, that practicality is in demand and equates to around a 3 per cent uplift in values.

Fiat 500 Giardiniera (1960–1975)
Average Hagerty Price Guide value: £14,775
Difference vs Fiat 500 F saloon: +3.1%
Fiat has always made cool versions of its little cars that make the most of the space available, but the Fiat 500 Giardiniera (Gardner) still oozes chic, Italian charm. Compared to the 500 F, Giardiniera values are a little higher, especially at Hagerty’s ‘Fair’ condition where their rarity adds £1000 to the price.

Austin Montego 1.6 Estate (1984–1988)
Average Hagerty Price Guide value: £2375
Difference vs Montego 1.6 saloon: +4.4%
The difference in average value between the Austin Montego saloon and the estate is actually just £100, but given their low overall prices, that’s a noticeable margin. With a one-piece folding rear seat (later upgraded to the luxurious 60/40), a wash/wipe on the back screen and optional self-levelling suspension, the Montego was recently identified as the ultimate car for winning the concours at the Hagerty Festival of the Unexceptional.

Mercedes-Benz E36 AMG Estate (1994–1997)
Average Hagerty Price Guide value: £23,600
Difference vs E36 Saloon: +5.1%
Values of early AMG Mercedes have risen sharply in recent years, and it is easy to see why with swift acceleration, slab-sided AMG alloys with a boxy bodykit, and the noise. In wagon form they’re as rare as hen’s teeth, all of which adds up to around a 5.1 per cent average premium over the already desirable saloon.

Morris Mini Traveller (1960–1969)
Average Hagerty Price Guide value: £8345
Difference vs Mk II Mini saloon: +13.8%
The Morris Mini Traveller is one of those cars that has always been a classic; and if you remember them on the roads at the time, they still seemed like something special, even then. The exposed wooden trim was evocative of an English country drawing room whilst the front end retained the comforting Mini ‘face’. Today, the Mini Traveller is a rare sight, and values compared to the Mk II Mini saloon are up nearly 14 per cent.

Citroën DS 19 Safari (1959–1965)
Average Hagerty Price Guide value: £19,050
Difference vs Saloon: +16.5%
Self-levelling suspension, loads of space and the glorious looks of the Déesse made the Citroën DS 19 Safari a popular, if not rather exotic, choice for buyers of the era. Today, like many in this list they are rare, and collectors will pay 16.5 per cent on average more than for the saloon.

Aston Martin DB5 Shooting Brake (1964–1965)
Average Hagerty Price Guide value: £1.023M
Difference vs Saloon: +109%
The biggest percentage difference in our list is also the most expensive car: the Aston Martin DB5 Shooting Brake. With 150mph performance and a fantastic load space famously designed by coachbuilders Radford to hold the polo equipment of David Brown, who took ownership of Aston in 1947, it’s more than double the average price of the saloon.

The full feature can be read here