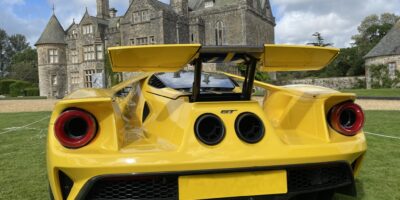 Specialist and classic vehicle online auction Car & Classic continues to widen its international reach with the latest, intense five-day auction of four low-mileage, no-reserve Ferraris. The Italian super sportscar collection is located in Belgium and being sold via the British company: a clear example of the truly far-ranging presence of Car & Classic’s fast-growing online platform.

The collection includes a 1976 Ferrari Dino 208 GT4, as well as a 1981 Ferrari 208 GTB, and two 1990 ‘young-timers’: a 348 TS and a TB. The Italian ‘Cavallini’ can be bought separately or together as a collection; apart from the provenance and the prestige that comes with it, they all share two features: low-mileage and a no-reserve status.

The 1976 Dino 208 GT4’s rarity (only 840 were made) is well documented; the example being auctioned, like its stablemates, was registered in Belgium. Imported from Italy, it is in very good condition, both mechanically and aesthetically, having clearly been looked after by its owner throughout their tenure. It boasts matching numbers and a fresh repaint in its original colour. With only just over 25,000km on the clock, and given its originality, the no-reserve status is particularly appealing.

The 1981 208 GTB is also rare, as only 140 were ever produced. Like the Dino, its pocket-sized engine was borne out of a desire to avoid heavy taxation in Italy, but it retains all the verve of its bigger counterpart; the one on offer also comes with matching numbers, original paint, 30,000 km recorded, and very good condition overall, with just two owners consistently looking after it throughout its life.

The last two Ferraris in the collection heralded the nineties and, like the first two, are powered by a V8: in these 1990 348 TB and TS, it is Ferrari’s last V8 incarnation before Enzo’s death in 1988. The Berlinetta (coupé), bought in Germany by the current owner and moved to Belgium like the others, is – again – in excellent condition with full-service history and matching numbers. The same can be said about the Spider (targa) which shows an equal level of consistent care afforded by the owner. Their mileage, around 33,000 km and 37,000 km respectively, is reassuringly consistent with the rest of the collection.

“From Gandini/Bertone to Pininfarina and Fioravanti via the Seventies, Eighties, and Nineties, this is a remarkable Italian design collection because of its originality, low mileage and rarity. We are recording an increasing number of important vehicles based in Europe and being auctioned through Car & Classic, a trend which only proves the trust international sellers and buyers put in the platform,” says Car & Classic Head of Editorial Chris Pollitt.

International auctions are a relatively new offering from Car & Classic, which extends its free Escrow service and unrivalled customer support to users wishing to sell their vehicle in Europe. “It is a natural response to the increase in both international demand and presence of buyers and sellers,” adds Chris. “A number of international sales come back to the UK, and Car & Classic has a handy article with useful tips on importing a vehicle into the UK.”