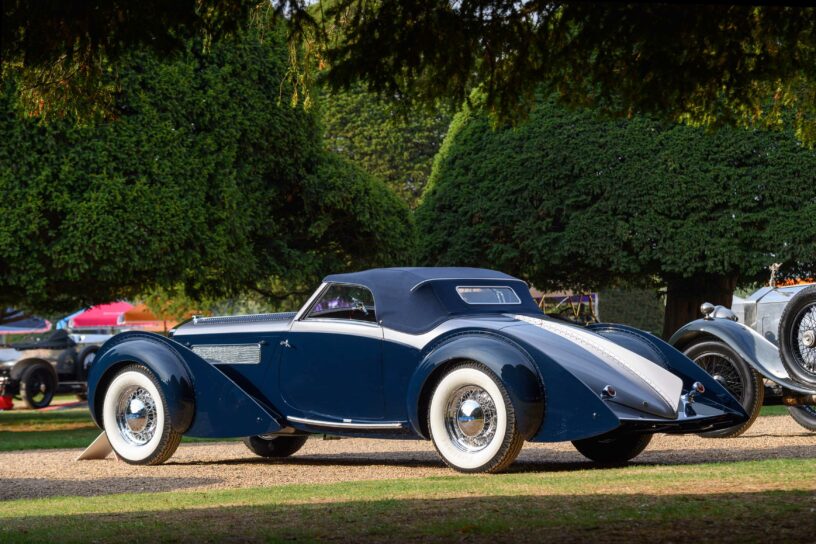 The Concours of Elegance, presented by A. Lange & Söhne, concluded yesterday after yet another fabulous automotive extravaganza, held over three days at Hampton Court Palace in west London. The 10th anniversary event welcomed a record number of guests to the immaculate Palace gardens, for the most spectacular display of rare and significant motorcars yet, cementing the event’s reputation as the UK’s top Concours d’Elegance event. The Best in Show winner – uniquely chosen by the Concours car owners themselves – was the truly exceptional 1938 Delage D8-120 ‘de Villars’, which enchanted the voters with its elegance, beauty and 1930s design flair.

Best In Show: 1938 Delage D8-120 ‘de Villars’
Our Best in Show winner is one of the finest examples to emerge from the storied Delage brand – known for producing flamboyant machines for the super-rich – which had been taken on by Delahaye in the 1930s. In 1936 the French marque created a state of the art 8-cylinder motor, based on their race proven, high-performance straight-six. With a spot of engineer Jean François’s magic it sprouted two extra cylinders, a 4.3-litre displacement, overhead valves and a single carburettor, to deliver around 105bhp. The D8-100 and D8-120 were born.

The ladder-frame chassis was provided in rolling form only, for customers to choose bodies as they wished. This remarkable motor car was styled and bodied by de Villars as a special one-off two-seater. The extravagantly styled example, with its tapering sport body coachwork, was first shown at the Concours de l’Auto de Printemps in 1938. It won the Grand Prize, quite a feat considering that at the pinnacle of the streamline era it was competing against all the major marques of the day. The Delage sold new for $7200 USD, making it one of the most expensive models in the world.

Pre-1915: 1912 Rolls-Royce Silver Ghost Touring
Elsewhere, there were class awards given for different eras – again voted for by the owners of the cars themselves. In the pre-1915 category, it was a stately Rolls-Royce Silver Ghost Touring from 1912 that emerged victorious, appearing at Hampton Court Palace days after its 110th birthday. An emblem of Edwardian engineering excellence, the Ghost was renowned for its effortless performance, exceptional mechanical refinement and near silent 7.4-litre motor; hence the ‘Ghost; name. Chassis 2092 was a particularly lavish example, specified with a seven-passenger cabriolet body, its fittings in gleaming brass, rather than the usual nickel.

1920s: 1925 Vauxhall 30/98 OE Wensum Tourer
In the 1920s category, it was a very special Vauxhall that came out on top – a 1925 Vauxhall 30/98 Wensum Tourer. When new the high-performance, sporting car – known as the “King of Thoroughbreds” – was locked in fierce competition with the Bentley 4.5-litre. The winning car is the most special 30/98 variant, one of just 12 cars supplied with the ‘ultra-sporting’ Wensum body, the light weight of which gave them even more sprightly performance. With its dramatic V-shaped windshield, head-turning ‘boattail’ coachwork – inspiration for which was taken from contemporary speedboat design – the Wensum was among the most stylish cars of its day. Chassis OE259 is particularly striking with its gleaming chrome finish. It is believed to be one of just six surviving cars, and likely the most original of all, its interior largely unchanged since it left the Vauxhall factory nigh on 100 years ago.

1930s: 1930 Cord L-29 Brougham
In the 1930s category, a Cord L-29 was victorious. The L-29 was highly innovative, the first American car to be offered with a front-wheel drive configuration. The new layout enabled the 2,100kg luxury machine to have an unusually low roofline when compared with competitors. The L-29 was propelled by a silken Lycoming 4.9-litre straight-eight engine, driving the front wheels through a 3-speed transmission. Four standard body styles were offered; the Broughman model which will be on display later this year is the most sought after and rarest. It is thought that only 10 examples of the Broughman have survived from the original three-year production run.

1940s & 1950s: 1956 Maserati A6G Zagato
For the 1940s and 1950s class, it was a very special Maserati that took the top prize – the stunning Zagato-bodied A6G. This was the ultimate evolution of Maserati’s A6 series, the marque’s first post-war sports car. Based on a lightweight tube-frame chassis, the A6G borrowed several features from the A6GCS sports racing car, including many of its motorsport-proven braking, steering, and suspension components. The all-aluminium twin-cam 150 bhp 2.0-litre six-cylinder engine originally designed by Gioacchino Colombo for racing was adapted by Vittorio Bellentani to create a dual-purpose car that blended GT civility with thrilling performance.

1960s: 1961 Aston Martin DB4 GT Zagato
In the hotly contested 1960s category, the winner was a truly exceptional Aston Martin – to many the most beautiful of all: the hallowed DB4GT Zagato. Combining the proven, high-performance DB4GT mechanicals with a stunningly stylish – and light – aluminium body by Italian coachbuilding house Zagato – the DB4GT Zagato represented the best of all worlds; the ultimate 1960s road and racing Aston Martin. The winning car, chassis number 1093/R, was the third of the MP209 ‘ultra-lightweight’ motorsport orientated examples, finished in the arresting hue of French Racing Blue. Built in 1962, the lightened special was delivered new to committed Aston Martin enthusiast and racer Jean Kerguen and raced at Le Mans, where the 3.7-litre straight-six powered machine could hit 170mph on the Mulsanne straight.

1970s: 1971 Lamborghini Miura SV
In the 1970s class, it was perhaps the most iconic supercar of all, a 1971 Lamborghini Miura SV, that won the hearts of voters. Unveiled at the 1966 Geneva Motor Show, the futuristic supercar – penned by Marcello Gandini – was, predictably, a sensation. Gandini’s seductive shape went into production in 1966, using the 3.9-litre V12 from the 400GT. This first model, the P400, ran from 1966 to 1968, and delivered a peak output of 345bhp. The ultimate version of the Miura – the SV – appeared in 1971, with altered Weber carburettors and different cam timing, which pushed output to 385bhp and torque to 295lb ft. In total, just 150 SVs were built out of a total Miura production run of 764.

1980s onwards: 1994 Bugatti EB110 SS
There was another fierce contest in the post-1980 category, with a special RHD Bugatti EB110 SS from 1994 taking the top prize. The Lamborghini Countach’s crafter, Marcello Gandini had a meaningful influence on how the EB110 looked, with the design refined into its finished form by Giampaolo Benedini. The brutalist yet sleek aluminium-carbon body cloaked truly cutting-edge mechanicals. Power from an outlandish quad-turbo, 60 valve 3.5-litre V12 was sent to all four wheels via a manual transmission. The EB110 also featured innovative double wishbone suspension front and rear – it was a real technical tour de force; a certain Michael Schumacher even bought one. This example is perhaps the most special of the 139 EB110s built – the only right-hand drive example, built for the 1994 British Motor Show. It was fitted with a prototype ‘SuperSport’ engine as well as prototype SS body parts, and was used to develop the higher-performance variant. It left the factory with 603bhp.

Ferrari 75th Anniversary Award – 1966 Ferrari 365P Berlinetta Speciale ‘Tre Posti’
For 2022 the Concours was celebrating the 75th anniversary of Ferrari with a very special category, assembling perhaps the finest selection of machines from Maranello ever seen in the UK. From the astonishing line-up, it was the one-of-two, nigh-mythical Ferrari 365P Berlinetta Speciale – more commonly known as the ‘Tre Posti’ that took victory. The wide, low, and arrestingly sleek 365 P, originally conceived to form the basis of a Le Mans racer, was revealed to the world at the 1966 Paris Motor Show. It subsequently toured the globe, wowing audiences with its futuristic Pininfarina body, outrageous three-seater cabin, and mid-mounted V12 – the first Ferrari road-car to be so configured. With only two in existence, this highly significant Ferrari is also among the rarest and most valuable.

Elsewhere at the event, the inaugural women-only Levitt Concours, which celebrated female car enthusiasts and collectors, was a great hit; the trophy went to a sensational 1932 Alfa Romeo Tipo B Monoposto, which delighted and deafened guests in equal measure. The show also welcomed a number of former winners back for the tenth anniversary show, with cars including the 1938 Hispano-Suiza Dubonnet Xenia wowing the crowds all over again.

James Brooks-Ward, Concours of Elegance CEO, said: “I’m delighted to report that the 2022 edition of the Concours of Elegance was a great success, and a worthy celebration of the tenth anniversary of the UK’s finest concours event. Our partners joined us in celebrating this incredible occasion, with the A. Lange & Söhne 1815 CHRONOGRAPH “Hampton Court Edition” watch, being auctioned for The Prince’s Trust, on display across the weekend. Not to mention the Charles Heidsieck Brut Millésimé Champagne created, with both our 2012 and 2021 winners adorning the label. And then, of course, our special tenth anniversary ties created by Henry Poole & Co.

“Aside from the incredible support of our partners, the collection of cars gathered at Hampton Court was truly spectacular, and the Delage D8-120 ‘de Villars’, a spellbinding Best in Show winner. The collector car auction of the year, in the form of Gooding & Co’s London Auction, was a perfect addition, providing a mesmerising show in the gardens, as some of the most incredible cars in the world went under the hammer.”

“I’d like to extend a heartfelt thanks to our immensely supportive partners, and of course the cars’ generous owners; without them this fantastic event wouldn’t be possible. I’d also like to thank the thousands of guests who visited us over the three days; we look forward to welcoming you back to the Palace in 2023.”