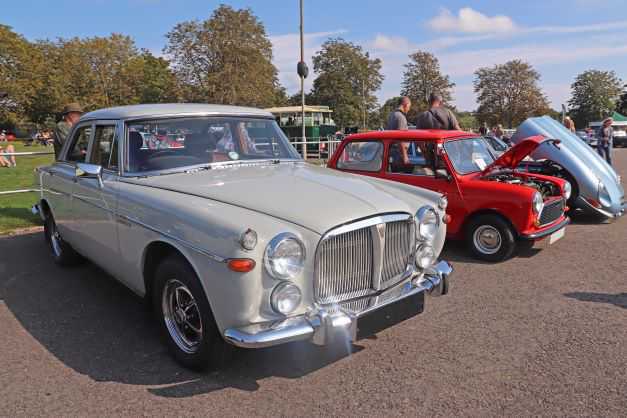 Classic car and bike fans are in for a treat as Simply British Classics returns to Beaulieu on Sunday 25th September. Celebrating some of the nation’s favourite motoring marques, the rally in the grounds of the National Motor Museum is sure to be a great day out that the whole family will enjoy.

From Aston Martins to Wolseleys, Berkeleys to Triumphs, Allards to Vauxhalls, all pre-2000 British cars and bikes are invited to take part. Last year’s rally saw a huge variety of motors drive into the showground, from an Armstrong Siddeley Sapphire, Ford Cortina Crusader, Reliant Scimitar GTE and Leyland Princess ST, to a Ford Escort RS1800, Vauxhall Ventora, 1930s Lagonda and even a 1931 Dennis coach and 1965 Bedford CA minibus.

Classics such as a Rover P4, Alvis TA21, Standard Vanguard Phase 3, Ford Granada Mk1 Coupe, Jensen CV8 and Rolls-Royce Silver Shadow also took their places alongside Triumph Dolomites, Minis, MGBs and Morris Minors, to make the show a truly diverse gathering. 2022 is sure to follow in its tyre-tracks with an equally varied selection of classics, all built in Britain or by British manufacturers.

Head inside the National Motor Museum, which tells the story of motoring in Britain, and see even more superb examples of British motors on show, from pioneering early designs such as the 1899 Daimler 12hp, to modern-day landmarks such as the 2005 Rover 75. Then explore the brand new exhibition, The Story of Motoring in 50 Objects, which celebrates the 50th anniversary of the National Motor Museum.

For some of the most iconic British cars of all time, check out Bond’s Aston Martin DB5 and V8 in exhibition Bond in Motion – No Time To Die, as well as agent Nomi’s Aston Martin DBS Superleggera and the battle-scarred Land Rover Defender 110 used in the latest action-packed Bond film. Don’t miss your chance to see this remarkable exhibition before it ends in November.

Event-goers can vote for their favourite British car of the show in the People’s Choice Award, with the winner receiving a Beaulieu trophy and an Autoglym prize. Voting is open to all visitors until 1pm that day, with the presentation taking place at 2pm.

Participants are encouraged to buy their tickets in advance at beaulieu.co.uk/events/simply-british-classics. Participant tickets, for those driving into the show in a qualifying vehicle to join the display, include entrance to the rest of the Beaulieu attraction.

All other visitors should purchase normal visitor admission tickets, which are available to book at beaulieu.co.uk.

Simply British Classics is just one of the exciting Simply rallies taking place at Beaulieu during 2022, with Simply Smart due to follow on 13th November. For Beaulieu’s full 2022 event calendar, visit beaulieu.co.uk/events.

Visitor and participant tickets include entrance to all that Beaulieu has to offer, including Bond in Motion – No Time To Die in the National Motor Museum, Little Beaulieu, World of Top Gear, On Screen Cars, the ancestral Montagu home Palace House, Secret Army Exhibition, 13th century Beaulieu Abbey and the stunning grounds and gardens.