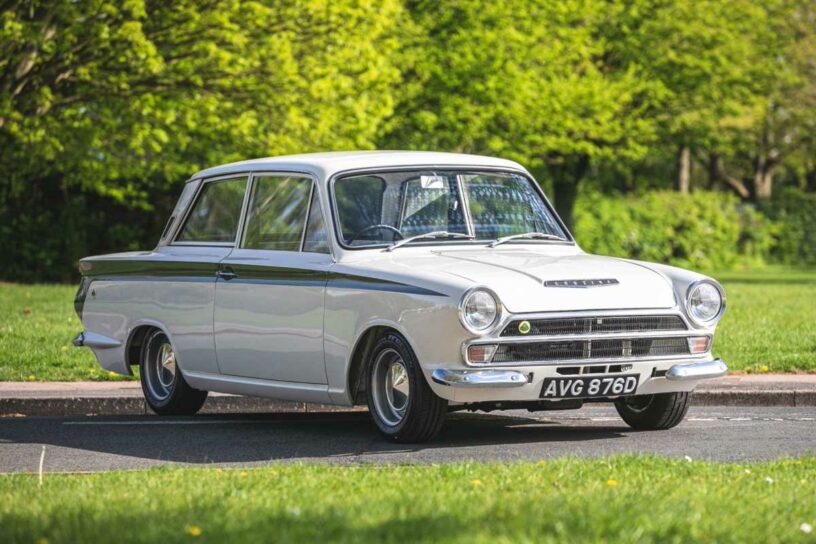 A stunning 1966 Lotus Cortina Mk1 Aeroflow is among a fine selection of classics being offered at Classic Car Auctions’ June sale on the 18th at the Warwickshire Event Centre.

Launched in 1963, the Lotus Cortina was presented to the press in Monte Carlo on the 23rd January and then some weeks later at the 4th Racing Car Show at Olympia.

Made famous by Jim Clark who won the 1964 British Saloon Car Championship, the Lotus Cortina became quite a success, especially in motorsport where 1,000 cars were homologated so Lotus could go and compete.

This fabulous 1966 Mk1 model has been subjected to the most impressive of restorations by a well-respected restorer and over the 12-month period, nothing was left untouched.

A replacement shell was used, keeping the original wings, etch-primed and finished in the traditional Ermine White with Sherwood Green flashes down the side.

This car is particularly desirable as it has the early Lotus gearbox with the tall 2.5 first gear which is only fitted to very early A-frame cars. The gearbox is mated to a fully rebuilt Twin-cam which has a John Smurthwaite “Fast- Road” head and QED 420 cams. It is also an Aeroflow, fitted with the outlets on the rear quarters to cope with the new Ford ventilation system it gained as part of an update in 1964.

This is a highly collectable car with many original features including the centre console and Ford radio. Offered at a guide price of £40,000 to £50,000 this is a very impressive and astonishing restoration.

Another true classic that has been entered into the June sale is a 1984 Porsche 911 3.2 Carrera in Guards Red. A very iconic car in a must have colour scheme.

This car has been very well maintained by the current owner, with over £8,000 spent in the last five years and as few as 500 miles covered in the last seven. When not in use, the car has been garaged and comes with a fresh MOT until April 2023.

The vendor is also including a number of spares, the original Blaupunkt radio cassette, paperwork and MOT certificates, which validate the mileage, in the guide price of £38,000 to £43,000.

Gary Dunne CCA Sales Manager commented: “We have two iconic cars of their eras, and at some point, we have all loved a red 911, they featured on posters that nearly every lad once had on their bedroom wall, I know I did!”

“The Lotus Cortina seemed to signify the start of the whole Fast Ford era, followed by the Escorts, Capris, and the whole Cosworth franchise in later years. CCA always does well with fast fords, I look forward to seeing what this one does on the 18th June.”

The Classic Car Auction Summer sale takes place on the 18th June with viewing days on the Thursday and Friday. The Warwickshire Event Centre has plenty of free parking and easily accessed from the M40, M42.

If you are buying or selling, the premium is 12.5% for buyers and 5% for sellers plus Vat.