The British Motor Show 2022 goes for a set of GUINNESS WORLD RECORDS® titles! 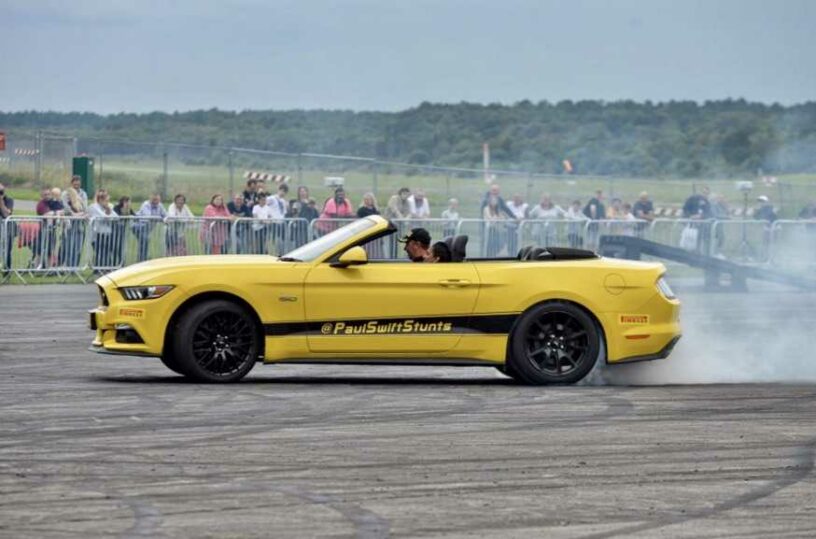 As well as a record attendance in 2022, The British Motor Show will be attempting to get itself into the history books by chasing three GUINNESS WORLD RECORDS® titles.

Two of these will be attempted by legendary stunt driver Paul Swift, and the other will be down to the participation of visitors to the show.

The Mass-Participation Record attempt will see The British Motor Show attempting to get the Most photos of people with the same car uploaded to Facebook in one hour. Using a new Ford Mustang as the photo subject, showgoers will be given one-hour windows to upload their images, with a view to getting as many images of the car onto the global social media platform as possible.

The show’s other two record attempts will take place in the Live Arena, where Paul Swift will be attempting to make his own mark by smashing his way into the GUINNESS WORLD RECORDS® book – or hopefully not quite…

The first of these will be to attempt the Tightest parallel park by electric car. Using one of the cars from our CAR-Monwealth games competition, Swifty will be exercising his precision driving skills to get under the required distance of 20cm.

The second will be for Paul to set the record for the Most donuts (spins) around a motorcycle performing a wheelie in one minute. The benchmark to beat on this is six. To attempt the record, Paul will be driving a Ford Mustang and will circle the bike, which must be consistently moving with one wheel in the air. It’s harder than it sounds…

Paul Swift said: “The British Motor Show is all about entertainment and so are our precision driving displays, but we want to leave this year’s show visitors seeing us make history by setting some new world records. It’ll be a tough call, but I hope by Sunday night we’ll have achieved it!”

The British Motor Show CEO, Andy Entwistle, said: “What better way will there be to celebrate record-breaking ticket sales than by breaking some records of our own – and by involving the public as well as out Live Arena record attempts we’ll be embracing the show’s ethos of being the most interactive car event in the calendar. I’m confident that The British Motor Show 2022 will go down in history anyway, but if we can make it official, even better!”

Pravin Patel, GUINNESS WORLD RECORDS® Adjudicator, added: “I’ve had the pleasure of verifying some incredible record titles in my time at GUINNESS WORLD RECORDS® as I like to be close to the action.  Three most memorable car records I recall are: The farthest barrel roll in a car; The shortest braking distance by a vehicle on ice; or Most consecutive donuts (spins) in an electric car on ice.

“I’m particularly excited to attend this year’s British Motor Show to adjudicate three exciting record titles – they promise to be amazing attempts to verify at first-hand.”

Within two hours of around 60 per cent of the British population, The British Motor Show is not only a ‘must-attend’ date for the diary, but it also offers unrivalled value compared to most family days out.

Sponsored by cinch, The event takes place at Farnborough International from 18-21 August, with advanced ticket prices held from 2021 at just £18.50 each, or £37 for a family of four. However, customers are encouraged to act quickly as some of the busier days are expected to sell out.