The role of virtual reality in designing the Dacia Jogger 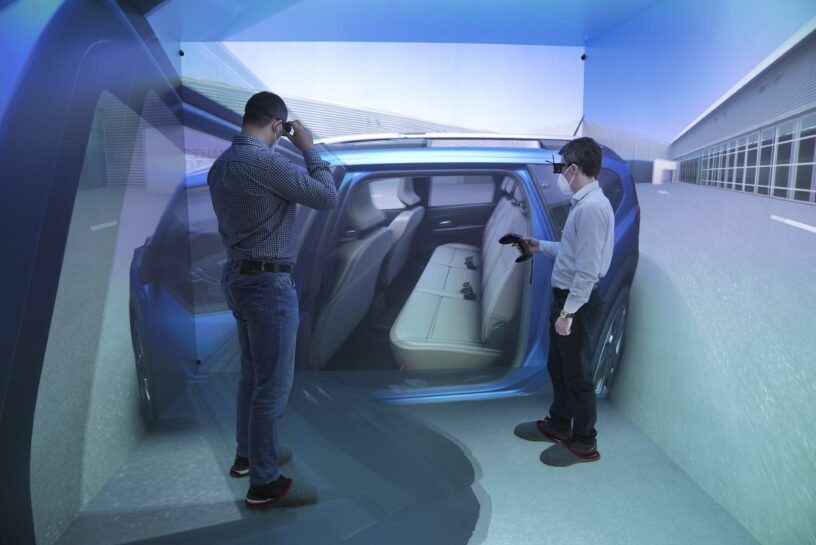 Applying Dacia’s smart engineering approach to the development of the All-New Dacia Jogger was made easier thanks to the use of virtual reality. Using Cave Automatic Virtual Environment (CAVE), a virtual reality platform that can be used to move around a vehicle during its design phase, engineers were able to test the model long before the first physical prototype saw the light of day.

Based at the Titu Technical Centre in southern Romania, Dacia teams used CAVE to optimise the interior practicality and spaciousness that the All-New Dacia Jogger is famed for. Titu, a small town located 45 minutes from Bucharest and home to fewer than 10,000 inhabitants, houses Renault Group’s second largest testing facility in the world. The facility gives access to state-of-the-art technology, winding tracks, numerous test lines, chambers that test the resistance of materials, and CAVE.

Product Ergonomics Manager, Ionut, who works at the facility describes the Cave Automatic Virtual Environment: “CAVE is a tool used to have a life-like simulation of reality. It is used to immerse oneself in the vehicle and judge how drivers and passengers perceive on board safety, ergonomics, and comfort, and then apply corrections in real time.”

FIVE WALLS, TEN PROJECTORS, SIX MILLION PIXELS
CAVE is the ideal tool to validate a new model’s schematics even before the first physical prototype can be made. With stereoscopic videos projected along five walls, the immersive space surrounds users and allows them to move around the vehicle and even climb on board as if it were a real scale-model.

After a thorough inspection using 3D glasses and multiple interactions between testers, a few clicks are all that is needed to alter the vehicle’s design. The team can act with precision thanks to the six-million-pixel resolution that allow for tests such as ergonomics of the dashboard controls, visibility around the vehicle, accessibility, comfort and even the overall design.

Andras, Expert Leader of Immersive Simulation and Virtual Reality says: “CAVE goes hand in hand with immersive helmets thanks to its superior image quality and interactive capabilities, where multiple designers can observe and work on the same vehicle, even in a driving situation. The pixel resolution is the same as that of the human eye, the user sees the vehicle as if it were indeed real.”

Ionut continues: “The virtual reality system makes it possible to validate a vehicle’s characteristics even in the very early stages of a project, without having to create multiple physical prototypes. Thanks to CAVE, we save more than 2 million euros per year.”

A NEW VIRTUAL WORLD
When testing the third row of seats in the new seven-seater Dacia Jogger, a group of thirteen consumers were chosen to take a journey into the virtual world.

The group of people from all different backgrounds were selected to help Dacia gain an understanding that was as close to reality as possible. The virtual environment was configured to test all sensations such as:

Passive driving (outdoor scenery scrolls past the tester, as if they were physically driving even though the pedals are not active)

By working directly with consumers and listening to feedback based on their immersive CAVE experience, the All-New Dacia Jogger’s second row of seats were brought forward by 20mm.

Ionut said: “We optimised interior modularity and created a very comfortable third row for all passengers. We were able to change the positioning of the seats in real time without pushing back the project’s schedule.”

Andras continued: “In the future, several users will be able to interact with a single object, each with their own point of view. Mini LED technology will soon make it possible to build CAVE systems with video projected on walls, in regular project review rooms.”

The application of Dacia’s philosophy is made easier thanks to this tool. It allows for rapid validation, multiple tests, cost reduction and interactions with customers.

The All-New Dacia Jogger is the latest addition to the Dacia range in the UK and was launched in early 2022. Over 1,000 orders were placed for the innovative seven-seater in the first two weeks of it going on sale.