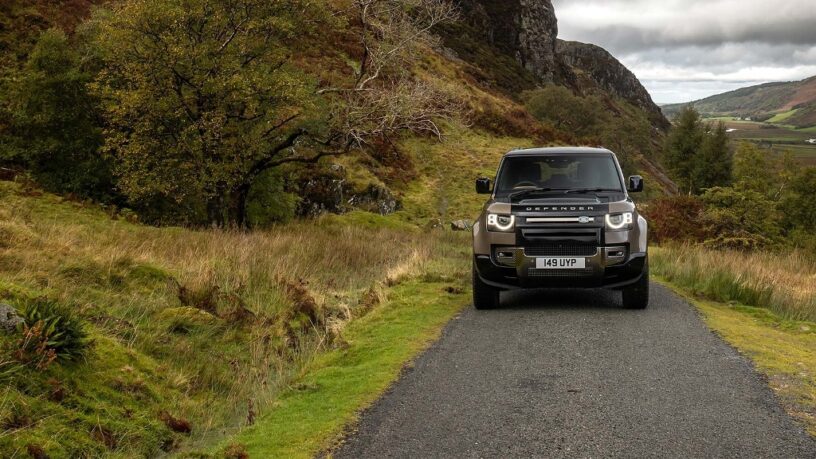 This year, the UK has relied on natural beauty close to home more than ever. For many, this meant exploring the adventurous hotspots right on our doorsteps, including the epic mountains of the UK. In fact, over the past year Snowdon has had 40% more visitors than in 20181.

With this rise in interest, Land Rover has analysed over 40 mountains across England, Northern Ireland, Scotland and Wales to create the Epic Mountain Guide. Each mountain has been examined against a set criterion with metrics looking at the height of the mountain and the average time to the top, to discover the easiest and hardest to climb across the UK.

In addition, to uncover the mountains that are the most loved by climbers, Land Rover has also looked at the mountains with the most Tripadvisor reviews and the highest average score. With the view from the top being a highlight of the climb, the research also includes the most picturesque mountains, consisting of those which are most Instagrammed (number of hashtags of the mountain name).

So, whether you’re a novice or an expert, and whether you want to strive for the most popular or the most beautiful, Land Rover has got you covered in their Epic Mountain Guide.

Aonach Beag, just 3km east of Ben Nevis takes the top spot as the hardest mountain to climb, even though it is far from the tallest. It stands at an impressive 1,234 metres but takes climbers on average six hours to reach the top due to its tricky terrain. Snowdon comes in as the second most challenging mountain to climb in the UK at 1,085m tall and with the average hiker taking 6 hours to reach the peak.

Rounding out the top three, Braeriach mountain is the third highest mountain in the British Isles and takes the third most challenging climb in the UK, with an average of five hours to climb.

But, if we’re going on height alone, the tallest mountain in the UK is Ben Nevis, with an elevation of 1,344 metres. Despite its height, the mighty Ben Nevis has been named the sixth hardest hike with climbers taking on average four hours to reach the top. This is partly due to the more built-up climbing experience at Ben Nevis – in comparison to the lesser-known neighbouring mountains – but also due to it only being a mountain that the more experienced climbers try their hand at.

Land Rover ambassador Kenton Cool said, “Scottish hills may appear small compared to places like the Alps and the Himalayas, but they pack a BIG punch.”

“The weather in Scotland is driven by maritime systems so expect huge variations in weather- extreme temperature is always something to be aware off. A cloudless sky as you leave the car park can easily be howling wind and lashing rain by the time you get to the summit.”

“ALWAYS carry a hard copy map and a compass- and know how to use it. The remote Scottish hills don’t always have cell signal meaning online mapping won’t work, in addition just a hand-held device with a map on can lead you into the proverbial creek without a paddle if the battery should run out.”

But the smallest mountain of the study is Slieve Muck in Northern Ireland (674 metres). This peak will take people on average two hours to reach the top, meaning it comes in at number three on the list.

Two Welsh mountains also make the list of the least challenging mountains to climb – Glyder Fach and Glyder Fawr. The two mountains are neighbours to each other and as both will take you just 1.5 hours to climb each, you could comfortably climb both in a day if you’re looking to make your hike more adventurous.

The UK’s most beautiful mountains as told by Instagram
Being present in the moment is incredibly important when it comes to hiking but you’ll want a picture to remember it too.

The UK’s mountains have been shared close to 1.2 million times on Instagram (1,153,357 total hashtags) and so it shows that all-important snap of the view from up there is part of the experience too.

Snowdon in Wales is the most popular mountain on Instagram with close to 423,000 hashtags of its view – that is over 180,000 more than the second most popular mountain on Instagram. With spectacular views of the rolling hills and peaks, stunning lakes and mountain streams, and beautiful blue skies or low-lying clouds, it’s no surprise Snowdon sits firmly at the top of the list.

Cairn Gorm in Scotland stands at 1,245 metres high and is the second most Instagrammed mountain with a total of 242,505 hashtags. Some of the top posts on Instagram feature beautiful snowy peaks and routes, the formation of rocks and stones at the top of the summit against a cloudy sky, and views of magnificent sunsets/sunrises and dazzling lakes, which showcase exactly why it’s snapped and shared so many times.

When it comes to difficulty, the Scottish mountain is ranked the ninth most difficult mountain to climb, making it harder than Snowdon (ranked 10th) – so worth sharing a picture at the top to catalogue that achievement!

The UK’s most-loved mountains
Snowdon in Wales takes the top spot on Tripadvisor with a total of 2,665 reviews and an average score of 5 stars. One user commented as part of a 5* review that Snowdon is an “Amazing place to be. Many routes going up to suit all levels”. Others titled reviews “Bucketlist adventure” and highlighted that “the views and sense of achievement are well worth it.”

Snowdon is part of the Three Peak Challenge alongside Ben Nevis (Scotland) and Scarfel Pike (England) and so it’s no surprise that all three of these make the top five most popular ranking.

But it’s Ben Macdui, the second highest Scottish Mountain, that takes the crown as the second most-loved mountain. The mountain boasts a total of 2,542 Tripadvisor reviews and an average star score of 4.5 stars, with reviewers commenting that it’s “a great way to spend some of your day, whether you want to walk up some of the trails during the day or take the train up and down the hill” and that “it was worth the journey just for the views from the top of the mountain”.

Wherever you hike around the UK, you’ll want the weather on your side. But this doesn’t mean you have to stick to a Spring or Summer hike.

Kenton Cool at Land Rover comments: “The British weather is a beast, and anything can be thrown at us- but a crisp autumnal day in North Wales or the Lake District is hard to beat. With the glory of the leaves turning golden and the autumnal light which makes photos so special I think it’s my favorite season to experience the wonderful hills we have in the British Isles.”

To find out more about the UK’s top mountains, for beginners through to experienced hikers, as well as the best for views and reviews, visit the Land Rover Epic Mountain Guide.