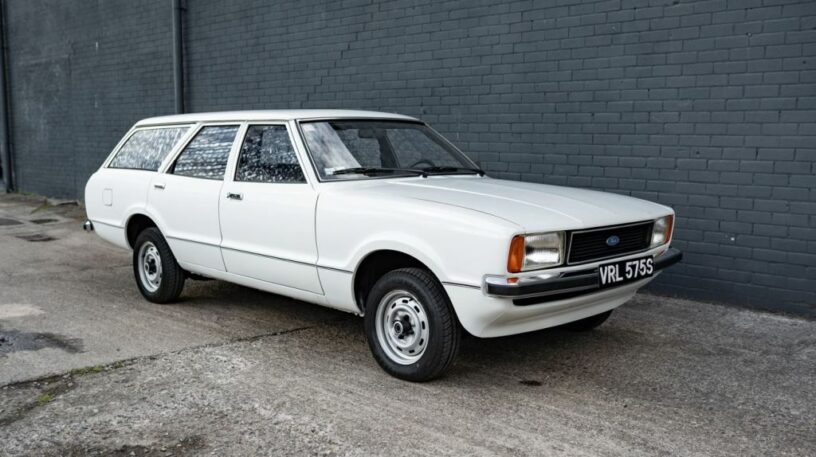 Having evaded the ravages of rust and the attention of banger racers, a true survivor 1977 mkiv Ford Cortina 1600L Estate, with just 4,418 miles (7,711km) from new, is heading to auction with Car & Classic. Underlining its status, 1,131,850 mkiv Cortinas were produced yet it is now one of the rarest variants of the model that regularly topped the UK sales charts. In 1977, the year this car was assembled, the Cortina was the UKâ€™s best seller yet less than 70 are recorded on the road and just two 1600L from that year online.

Incredibly original, this 1600cc version was assembled in Lisbon, Portugal, and was driven sparingly by an elderly lady owner in the country, resulting in the low mileage and incredible level of preservation rarely seen in UK cars. The underside is particularly impressive with clean, smooth finishes on the floor, suspension and drivetrain. The 1600cc engine retains its original blue paint on the rocker cover. Inside, itâ€™s a similar story with beautifully preserved interior and, remarkably for any older Ford, no cracks in the dashboard. Only slight paint blemishes on the bonnet and rear door, as a result of the wrap used to transform the car into a Dubai police car for its role in the Bell Bottom movie, would need attention.

The care bestowed upon it by the original owner is underlined by the inclusion of the service books, owner manual, spare key, tools and a set of factory mud flaps that were never fitted. Retaining its Portuguese heritage, the windscreen still sports local authority and insurance vignettes. Already registered in the UK, it avoids the additional cost and paper now needed when importing cars from overseas.

â€œCar & Classic has the uncanny knack of offering some of the most incredible cars for auction and this another,â€ says Chris Pollitt, head of editorial at Car & Classic. â€œCortinas once graced every suburban semiâ€™s driveway or were a staple for sales â€˜repsâ€™ to thrash to the next appointment, yet now they are virtually extinct and finding another like this would be near impossible. Easy to enjoy, run and service, itâ€™s the car that will spark nostalgia, a true â€˜had one of thoseâ€™ cars, and would be the perfect contender for Hagertyâ€™s Festival of the Unexceptional.â€

The online-onlyÂ seven-day auction for the Ford CortinaÂ starts on the 30 September 2021.