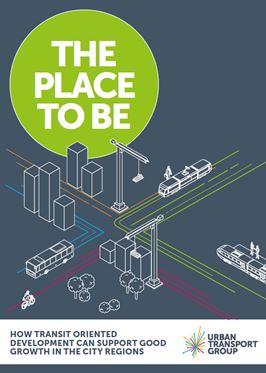 Placing transport at the heart of new building developments will maximise access to public transport, encourage walking and cycling, and minimising the need to own and use private cars, it says.

This is because such schemes can be located next to (or as part of) existing stations or transport hubs; on brownfield former industrial sites (many of which are often located on rail corridors or are indeed former rail industry sites), or at suburban locations with good access to rail stations.

Tobyn Hughes, managing director of Nexus and chairman of the Urban Transport Group, said: “Transit oriented developments are an idea whose time has truly come.

“This is because they have the potential to help meet the UK’s housing demand and reduce car-dependency and urban sprawl, whilst contributing to a host of wider public policy goals for city regions.

“But if we are to embark on a new era of transit oriented developments, and realise the benefits they can bring, we must overcome a series of obstacles and barriers around the planning and funding of these developments.”

The report also examines other areas where transit oriented developments can deliver benefits, such as to local economies, air quality and carbon emissions, social inclusion, employment and skills, health, and use of public transport.