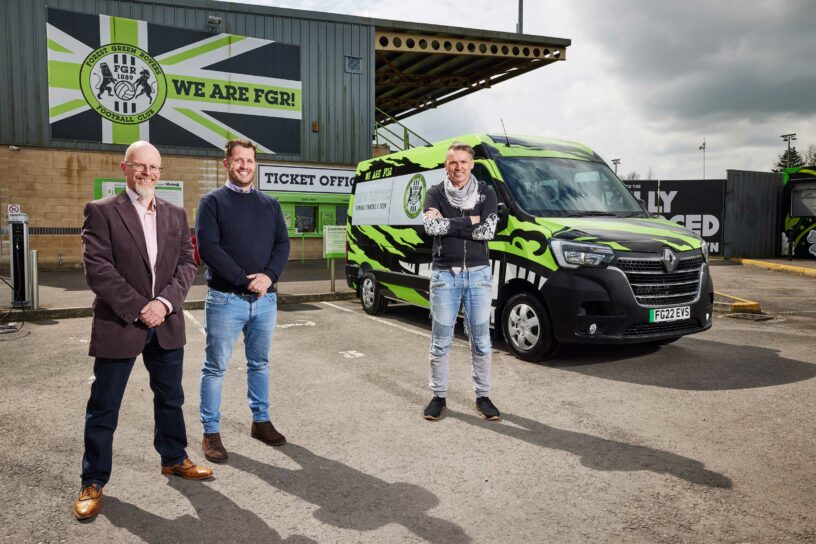 The cleaner, quieter electric minibus will be used primarily to transfer the Forest Green Rovers’ Academy and Ladies teams between training grounds, as well as supporting local marketing events around Gloucestershire and transporting club sponsors and VIPs on match days.

Dale Vince, Chairman of Forest Green Rovers, said “Renault Truck’s new minibus is a great addition to FGR’s growing fleet of electric vehicles. It’s perfect for our academy and will help us as we drive the last bits of fossil fuel use out of the club and our carbon footprint to zero.”

Alex Williams commented: “As the first commercial vehicle dealer network in the UK to commit to net zero by 2030, Renault Trucks firmly shares Forest Green Rovers’ sustainability ambitions. We are very proud to support the world’s greenest football club with a Renault Trucks Master E-Tech minibus, powered by renewable energy, that will drive Forest Green Rovers fight against climate change further forward ahead of its League One campaign next season.”

Powered by a R75 electric motor and 33kWh batteries charged using 100% green energy from power firm Ecotricity that includes some energy generated onsite from solar panels on the stadium roof, the electric minibus provides a range of around 80 miles, ideal for operating on local routes.

The Master E-Tech was converted by Minibus Options, one of Renault Trucks’ approved converters from its Ready for Business range, a leader in people transportation for over 30 years. Local service for the vehicle will be provided by Renault Trucks Commercials in Bristol.