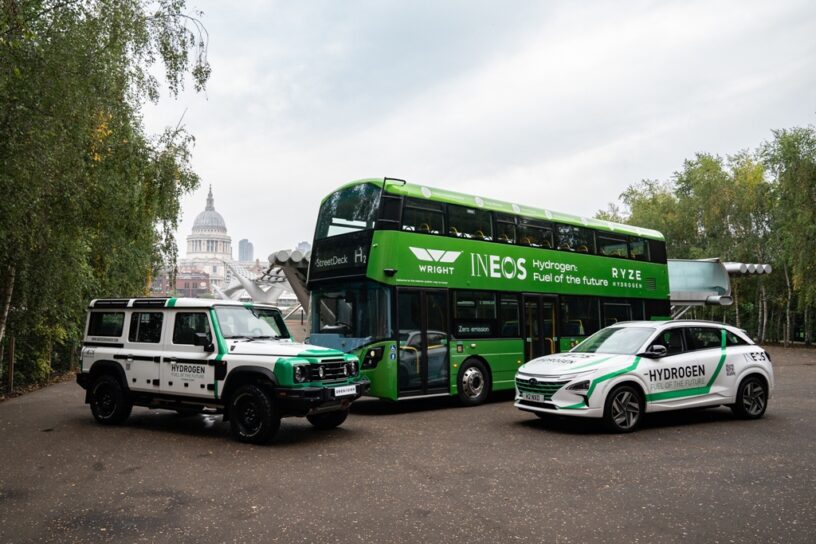 INEOS, Europeâ€™s biggest operator of electrolysis needed to produce clean, low carbon hydrogen, has doubled down on its â‚¬2 billion investment in green hydrogen with the launch of a hydrogen advocacy campaign.

The campaign kicked off with the publication of a powerful editorial in the Sunday Telegraph on the hydrogen economy written by Sir Jim Ratcliffe, INEOSâ€™s founder and chairman.

Today sees this followed by a national multi-media campaign that includes substantial billboard and digital advertising as well as a hydrogen bus exhibition tour and presence in Glasgow at COP26.

Sir Jim says:Â â€œWe believe that hydrogen is the fuel of the future and INEOS is determined to take a leading role in its development. When used in a fuel cell, hydrogen only produces water and is the UKâ€™s best chance of reaching its carbon reduction targetsâ€.

INEOS Automotive is also exploring new opportunities in the hydrogen economy, with a hydrogen fuel cell demonstrator of its Grenadier 4×4 now in development

Hydrogen is a fabulous, clean source of energy that can be used as both a raw material for industry and as a power source for transport and the home. It has a massive role to play in lowering the UKâ€™s greenhouse gas emissions and INEOS is committed to playing a leading role in the hydrogen revolution.

INEOS is Europeâ€™s largest existing operator of electrolysis, the critical technology which uses renewable energy to produce hydrogen for power generation, transportation and industrial use.

INEOS already produces and uses 400,000 tonnes of low carbon hydrogen every year, the equivalent of replacing up to 2 billion litres of diesel. It knows how to make, transport, store and use it.

Being a user and producer of hydrogen puts INEOS in a unique position at the heart of green hydrogen development. And the company has announced that it intends to invest â‚¬2 billion in new production of green hydrogen across Europe.

It is also launching a major hydrogen advocacy campaign to draw attention to both the benefits and applications of hydrogen. The campaign will include significant billboard and digital advertising in London and Glasgow, a UK hydrogen bus tour and the exhibiting of a hydrogen powered car at COP 26.

Sir Jim says, â€œElectric cars are ideal for city centres and short journeys. But hydrogen is much better for longer journeys and heavier loads and that requires immediate investment in hydrogen distribution and hydrogen filling stations.â€

The companyâ€™s INEOS Automotive division is also backing hydrogen fuel cells as the clean powertrain solution for future versions of its upcoming 4X4 vehicle. Thanks to a partnership agreement signed in November 2020, the Grenadier hydrogen fuel cell concept will use fuel cell technology from Hyundai Motor Company, with testing to begin by the end of 2022.

In the longer term, hydrogenâ€™s other massive contribution to the reduction of greenhouse gases will be in the home heating space where natural gas can be replaced by hydrogen which could cut greenhouses gases by up to a third on its own.

Wherever possible, INEOS will continue to prioritise the production of green hydrogen which is made from water using electrolysis powered by renewable energy, but it is also investing in the production of blue hydrogen when the carbon produced can be safely captured and stored underground.

Sir Jim, though, adds a warning for the UK government. â€œThe issue is thatÂ industry can only do so much, and the UK government must start to invest in the development of our hydrogen infrastructure to allow the gas to be much more widely used. At the moment, we are massively lagging behind Europe and the gap is starting to growâ€.