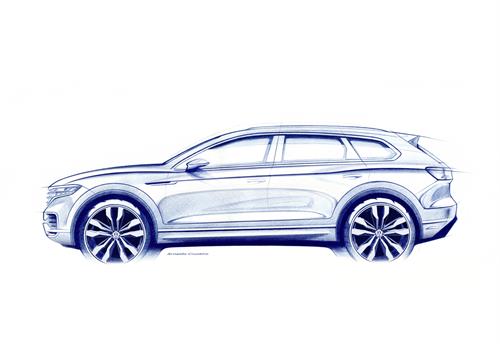 Volkswagen is kicking off the new automotive year with the world premiere of the new Touareg. The brand’s flagship is the next milestone in the largest model campaign by Volkswagen. Standing at the top of the model range, the Touareg shows all of the brand’s power with its expressive design, innovative technologies and dynamic handling properties. The world premiere of the top vehicle will take place in China, the world’s strongest growing SUV market and the companyâ€™s largest individual market.

The new Touareg makes the brandâ€™s standards clear. The highly expressive design by Klaus Bischoff, Head of Volkswagen Design, and his team give it an unmistakable appearance that is strong in character. A phalanx of innovative assistance systems gives it a maximum degree of safety and comfort. One of the largest digital cockpits in its class, the Innovision Cockpit, opens up a new type of infotainment environment. Its connectivity makes it a driving internet node. The drivetrain, air suspension, rear-wheel steering and roll stabilisation all ensure a safe and dynamic driving experience.

With the new Touareg, Volkswagen is continuing the success story of this model series into a third generation. Like its predecessors, it will satisfy the rigorous standards of the premium automotive class and its customers. The exclusive SUV C-segment is currently one of the fastest growing segments in global automotive markets and is expected to double its volume by the year 2023 in China, for example.

The Touareg has demonstrated its performance power and driving capabilities impressively in around one million units ever since the model series launched in 2002: on-road, off-road and on rally trails around the world. Highlights include wins in the Dakar Rally events in the years
2009-2011.

Volkswagen is revealing the new Touareg and the entire range of its technical capabilities and comprehensive features for the first time in a world premiere on 23 March 2018 in Beijing.

1) The new Touareg is not yet on sale and is therefore not governed by Directive 1999/94/EC.