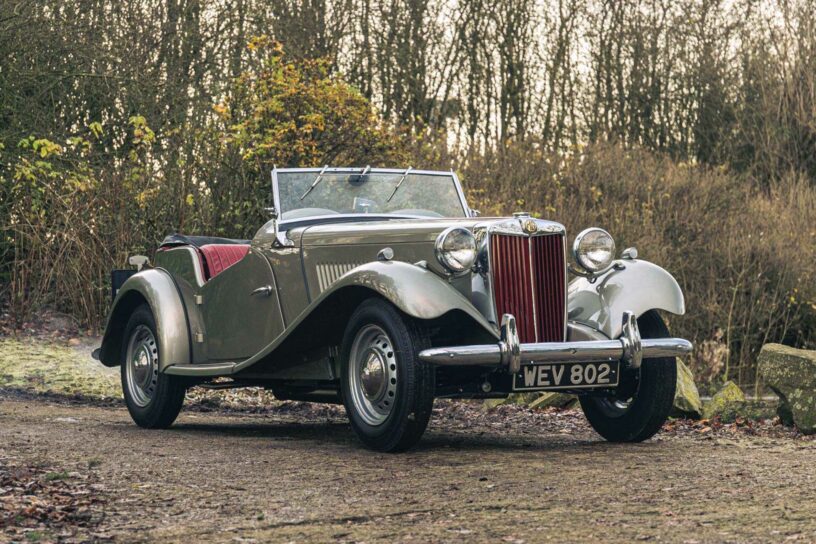 This charming post WW2 original UK-supplied TF, recently rebuilt with Best In Show accolades. Will be sold by Classic Car Auctions on March 24th. As part of a single collection.

An original UK right-hand drive TF finished in Ivory with Red trim it was purchased in 1969 by Gilbert Vickers in a sorry state and in need of a complete rebuild.

A new Naylor Brothers tub was sourced but the project did not proceed at that time.

It was bought in 2016 by our vendor who completed the project including rebuilding the engine, incorporating new carburettors, gearbox and final drive. A complete retrim was also undertaken at this time.

Fully rebuilt on a new Hutson tub and still in its original factory colour scheme This elegant MG is a head-turner.

Powered by the proven 1,250cc XPAG engine with a 4-speed manual transmission, it was reputedly capable of 82mph and 26mpg.

An original UK-supplied TD living for some time in the USA in the hands of its US Air Force owner.

It was repatriated in the late 1990s with extensive works carried out by Naylor Brothers. With our vendor since 2005 and benefitting from a bare chassis restoration during his ownership.

Rebuilt utilising a new Hutson tub with four new wings and refinished in its original shade of Silver Streak Grey Metallic. Fully mechanically refurbished including the engine, gearbox and rear axle.An underrated 1950s sports car that is ready to go and be enjoyed once again.

An outstanding M-Type Midget, a fully rebuilt multi-award winner. A superb little, boat-tailed M-Type from the first year of production.

Powered by the 847cc, 20bhp, four-cylinder, bevel-gear driven OHC engine shared with the Morris Minor. Discovered in 1969 residing on the roof of a garage in the North East by the late Alistair Naylor.

Passed on to Huddersfield plumber, Herbert Swallow, in 1970 who then commenced a restoration.

Purchased by its present owner, a marque specialist, in 2009. Now fully rebuilt to an outstanding level with works including a rebuilt engine, gearbox and axle.

This particular example is fitted with the later camshaft increasing power to 28bhp. The fabric body was recovered and the interior retrimmed as required. A delightful Midget in a condition that will not disappoint